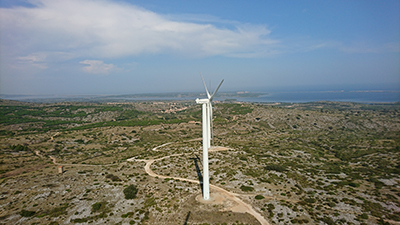 Spica Technology has won a tender from a big French energy company to develop, deliver and install the Spica Retrofit Controller on 9 Nordex N60/1.3 MW wind turbines with an automatic acoustic regulation plan implemented in the software.

The wind turbines are located too close to a small city in southern France to make repowering a possibility due to regional regulations. Due to the short distance to the city and complaints about noise the wind turbines have to stop at certain wind directions and wind speeds.

Because of the limited remote functions, the wind turbines have to be stopped and started manually by a wind turbine technician on site. He shuts the entire park off if only one turbine is too noisy according to regulations.

Spica Technology has developed an individual automatic acoustic regulation plan in the software of the Spica Retrofit Controller that has been installed in the first wind turbine where it will collect data until spring 2021 when the control system will be implemented in the other 8 turbines.

Now the French energy company will get an intelligent and automatic acoustic regulation plan for each single wind turbine which turns the turbines on and off according to wind direction and -speed.

This will not only give them a brand-new control system, but also a much higher availability due to the automatic acoustic regulation plan. Additionally they have full remote control.

Earlier Spica Technology has been able to combine the Retrofit Controller with other customer specific solutions such as LIDAR and blade load monitoring.

Sign up for our newsletter and stay updated on our latest activities!