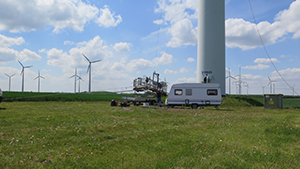 wpd windmanager is committed to retrofitting

wpd windmanager has signed an agreement for the delivery of 10 Spica Retrofit Controllers from the Danish specialist in wind turbine control systems, Spica Technology. The retrofit controllers shall replace the original Vest Control in a wind park consisting of 10 Wind World W5200/750 kW turbines. That operation might be the start of a comprehensive retrofitting cooperation between wpd windmanager and Spica Technology.

The project was initiated back in May 2015 by retrofitting a single test turbine. The very satisfactory result paved the way for installation of the retrofits in the remaining nine wind turbines in September 2016

wpd windmanager is a company engaged in the technical and operational wind farm management. The implementation of the controller was supported by the company psm Nature Power Service and Management, responsible for the service of Nauen wind farm.

“We were internally evaluating the strategic approach in optimizing our operating portfolio and reached the conclusion, that one of the few changes, which will impact the operational readiness of a WTG is simply reducing down times and updating or upgrading the WTG controller. This to ensure better communication in the data monitoring, less error codes and unexplainable downtimes, better adjustment of the WTG”, and continues:

”Spica Technology is one of the few companies specialised in this task and came with the perfect solution. We are very satisfied with their work performed in short notice.”

The special feature of the Spica Retrofit Controller is that it replaces the old control system with the newest standards in communication and parameter settings. The up-to-date software monitors the wind turbine in exactly the same way as the control system in new wind turbines making it possible to monitor the wind turbine closely, avoid lost production and increase wind power performance through predictive maintenance.

Wpd windmanager has two main reasons to intensify their retrofit strategy, and thus for signing an agreement on the retrofit control system from Spica Technology:

” The technical optimisation of our wind farm portfolio is one of the key targets. We wanted an affordable control system that could decrease downtime and up the performance of existing wind parks where repowering has been deemed infeasible. At the same time, we could also use the Spica Retrofit Controller also for the refurbishment of repowered wind turbines mainly outside Germany. The system allows us to professionally manage older, repowered turbines independent from the country location”, says Peter Spengemann.